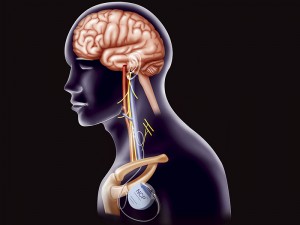 Vertigo, which is a feeling that the room is spinning is often caused by Benign paroxysmal positional vertigo (BPPV), which can also cause and nystagmus, or uncontrolled eye movement. BPPV is caused by changes in the position of the head and the horizontal semi-circular canal in the inner ear. The most common sub-type is (HC)-BPPV, which is characterized by direction-changing positional nystagmus (DCPN), or nystagmus that occurs when turning the head.

Persistent DCPN that occurs with vertigo can be divided into geotropic, which may be caused by movement of calcium crystals in the inner ear because of gravity, known as canalolythiasis, or apogeotropic, which may be caused by cupulolithiasis, or calcium crystals that adhere to the cupula and excite the nerves in the semicircular canal of the ear.

While it is not entirely clear why DCPN occurs, a number of possible causes have been suggested, including:

Repositioning manoeuvres have been proven ineffective at treating geotropic DCPN, which suggests that the condition is caused by something other than free floating debris.

Transcutaneous vagus nerve stimulation has proven to be an effective method of stimulating the auricular branch of the vagus nerve for treatment of chronic pain, some types of epilepsy, tinnitus, and even coronary heart disease. This type of therapy may also be effective at balancing parasympathetic and sympathetic nervous systems in a noninvasive, effective treatment for persistent vertigo in sufferers of geotropic DCPN.

The device stimulates the afferent auricular branch of of the vagus nerves using mild electrical impulses through the skin. It is safe to use for most people can cause burning tingling, mild pain, or itching. The device should not be used in pregnant women or people with heart disease, head trauma, migraines, alcohol or drug addiction, psychiatric disorders, or those with cochlear implants, pacemakers or other metal implants.

More research is needed into transcutaneous vagus nerve stimulation, but its effects on neuromodulation suggest that it may have as yet undiscovered benefits for the body, particularly for persistant vertigo.